Written by Civic Society member Angela Marshall and inspired by the TV programme A House Through Time, this is the story of a  Honley house, a family business and a lost community. Banks is that area to the south of the village centre and was the home to Holdroyd’s Joiners and Funeral Directors for almost 200 years. The book has 104 pages and is fully illustrated with over 70 pictures plans and maps black and white and colour.

It is available from Holme Valley News and Zebra Jewelery in Honley and READ bookshop in Holmfirth, priced £10.00. Copies may also be obtained though the post by contacting Honley Civic Society at honleycivicsociety@outlook.com  Postage is an additional £2.50

The author had hoped to give a talk to the society to accompany the launch of her book. However this has not been possible and so a brief outline of how Finding Banks came into being can be found under the page Civic Society Talks

HIGH DAYS AND HOLIDAYS IN HONLEY 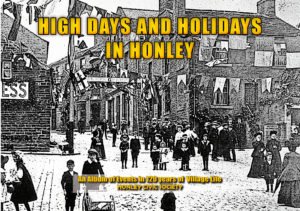 The group’s recent publication, High Days and Holidays in Honley makes the most of our archive with over three dozen pictures of the way villagers have celebrated across the past century and more.
The most typical events include Walks and Sings, usually as an excuse to dress in their finest clothes and walk round the village accompanied by the local band to then join in singing hymns for religious festivals – Easter and Whitsun – or for Honley Feast in the autumn.
Each page has an illustration and a short caption explaining the event depicted, from royal coronations to public house outings, coming right up to date with the Honley Remembers celebrations in July 2019.
The book is in A5 format and costs only £5.00. It is available from Holme Valley News in Honley and other valley outlets.

Published by GR Books this book has been written by the well-known local historian who died in 2018. Honley  Civic Society has acquired a number of copies to sell and these are now available by post and at society meetings. Written by an author with a strong sense of attachment to the place, this work describes the evolution of the small community of Magdale near Honley from the days of the handloom weavers, through the industrial revolution to the heyday of textile manufacturing.

The lives of people from farm labourers to woollen manufacturers are depicted, sometimes in vivid detail, against the wider background of rapid social change, culminating in the tragedy of the First World War. An album of 42 pictures, both black and white and colour, many of which have been given to Honley Civic Society since the publication in 2002 of Hope Bank, Honley’s Pleasure Grounds.

Most of the pictures have not been seen for many years and depict the grounds as laid out by the owner, John Mellor.

Honley Civic Society has assembled the postcards and family snaps, which make up the book, into a pocket sized album, ideal as a gift. The book has 40 pages and is priced at £5.00.

I REMEMBER…My 1920s Childhood in Honley

The author was born Margaret Kinder, her father being Ben Kinder a representative for fine worsteds, with an office in Cloth Hall Street.

She recalls family life at home in Bradshaw Road in Honley and with the neighbours, the Oldfields who were also well-known in the village.

Honley National School sits in the centre of the village and has played a central role in the life of generations of villagers. Although it is today an Infants’ school, the ‘Nash’, as many knew it, formerly provided an education up to the age of 14 years.

Reliant on the research done by a late member of Honley Civic Society, Bob Etherington, the text has been enhanced with details of the staff and some of the pupils over the decades. One teacher toured the world in 1911 with the Sheffield Choir, while another was the brother-in-law of the inspiration for Elgar’s Nimrod.

Tales of the day-to-day life of the school are recounted along with interesting insights into the way we lived long ago. 72pp with over 60 illustrations, A5 format, £8.50.

PAGODAS AND POTATO SALAD
This fully illustrated book chronicles the lives and personalities whIch went to make Honley Cricket Club the champions which they are today. Written by well-know cricket historian, Peter Davies, there is plenty to interest the cricket fanatic and layman alike.
32pp + card covers, 47 illustrations, some in colour. £4.00

Almost everyone in Honley has heard of Hope Bank – the playground of several generations of villagers. Sadly, the Pleasure Grounds are no more, but their story lives on.
40pp + card covers, updated with colour and b&w illustrations. £5.00

In her lifetime, Mary was a historian, novelist, dog breeder and post mistress. Her story is told in fascinating detail.
36pp + card cover, illustrated £4.00

These two books cover the chapel histories Wesleyan, Primitive and Independent from their beginnings to the present day.

The refurbishment of the parish church in 1888 gave Mary Jagger the spur to write an account of the church up to that date. Reprinted from the original notes with some additional historical detail.
40pp + card cover many illustrations £5.00

A WALK AROUND HONLEY

This walk takes visitors on a fascinating route round the village, highlighting historical aspects as they stroll. Lasting up to two hours depending on the reader’s preference, the walk can also be undertaken from the comfort of your armchair simply by looking at the pictures.
28pp + card covers, fully illustrated in colour. £4.00

Specially commissioned from local artist Andrew Jenkin, this booklet has 45 paintings and sketches of the village of Honley. In addition, each picture has a brief historical note. Ideal as a gift or simply as a keep-sake.
40pp + card covers, illustrations in colour. £5.00

HONLEY THROUGH OLD ADVERTISING
The many businesses which supplied and employed the villagers of Honley mostly forgotten today are recalled through the ephemera and advertising which survives.
40pp + card cover. Many illustrations £5.00

THE BROOKES OF HONLEY

Even in the 21st century, the villagers of Honley have good reason to thank the Brookes. From work place to recreation field, from school to church, the Brooke family had a hand in its provision. In this brief account of the family, we record its leading members and the contribution they made to Honley life.
28pp + card covers, 42 illustrations in colour and b&w. £4.00

Tucked away behind Castle Hill is a small village with a rich history. Over 92 pages, this book recounts almost one thousand years through church, school and many other aspects of the life of this community.
Price £10.00 new lower price

Our publications are normally available at Holme Valley News or Zebra, both in Westgate, Honley and Read Bookshop of Holmfirth.
Mail order is available. Please email the society for details.
honleycivicsociety@outlook.com