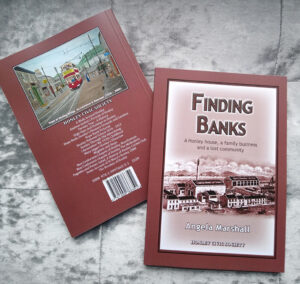 Finding Banks: a Honley house, a family business and a lost community – the bonus track

Had we been living in normal times, by which I mean proper normal, not ‘new normal’ or any other supposed definition of ‘normal’, I would have been able to give a short talk at a Honley Civic Society meeting to coincide with the publication of the new book, Finding Banks: a Honley house, a family business and a lost community.

With meetings temporarily suspended or, perhaps even worse, the prospect of speaking to a room full of people wearing face masks, such a presentation is not currently possible. The changed circumstances therefore prompted consideration of an alternative means of communication to mark, and perhaps further promote, the new publication.

It occurred to me that when I buy a DVD I am drawn to the special features that may be included on it. These often give an insight into the making of the film or programme, with personal stories from those who are involved. They give an opportunity to peek behind the scenes, often giving depth to the main feature and introducing perspectives that we might otherwise be unaware of.

This short piece has been written specifically for the HCS website as a ‘special feature’ or – in musical terms, the ‘bonus track’. Its purpose is to complement rather than duplicate the contents of the book.

That I have not only written a book but had it published astonishes me as I am not an academic person. During my career in social care, I did what was necessary at specific times to improve my prospects but my focus was always on practical skills and on communicating with people who really didn’t care what qualifications I might have. In 2009, a change of job had brought me into contact with new colleagues who had not only embraced academia but who apparently even enjoyed its challenges; this prompted a somewhat doubtful step towards the Open University. By the end of 2013 I had achieved a Diploma of Higher Education in Social Sciences, via a Certificate in Business Studies, gaining a number of ‘distinctions’ on the way! The biggest lesson learned was that sometimes you really don’t know what you can do until you try – which brings me back to the book.

It is a little embarrassing to acknowledge it but Finding Banks came about by accident. A clear out of old financial papers might, a few years earlier, have seen the whole lot tossed carelessly into the green bin, but by early 2018 awareness of the potential for identity theft meant a more considered approach to their destruction. This led to the opening of a sealed package of papers that had lain in a box in the cellar since being returned to us after the mortgage on our house had ended a decade earlier.

Amongst the papers I expected to find were some that I had not. There were a couple of records relating to past ownership of our house but most notable amongst the slightly ragged documents was a faded copy of a contract relating to its sale in 1903. With hindsight, this find was just the first of a series of what may be considered as ‘happy accidents’.

Some reasonably comprehensive family history research had been completed over the previous 15 years or so and, having gone as far as I felt inclined to, I was two months away from probably not renewing my membership to the Ancestry website. However, with this still at my disposal, I started to put a few names from the 1903 document into the search facility and began to record my findings. The rest, as they say, is … quite literally … history.

If I had to create a formula for such a project it would include elements such as an obvious interest in the subject, satisfaction in finding order in records, engaging in detective work, pleasure in writing and a genuine interest in people. The BBC programme ‘A House Through Time’ had shown that it was possible to track the occupants of a single property back to its beginning through records and I wondered if I might be able to do something similar with the house that, for the previous 30 years of its history, had been our home.

With the exception of the papers I had found in the cellar, all the information I gathered was already in the public domain. In addition to the Ancestry website and the books published by Honley Civic Society as well as others in the library. I found websites such as Huddersfield Exposed, which brought old maps and more written works to my notice. I also learned that, sometimes, an arbitrary ‘Google’ search can produce quite remarkable results.

As I made progress I began to build up a picture of the people who had lived in our house and what their lives might have been like. I was also surprised to find out that the building was actually much older than we had understood it to be.

Several times I decided that I had finished my research only to have my interest re-ignited by a new find or a chance conversation. The more people who stepped out of the shadows of history and into my notes, the wider the picture became and I soon recognised that I was actually writing about a community, not just about a single house.

Perhaps I had a few lucky breaks but, not for the first time, I wondered if coincidences really happen, or whether they are they just opportunities that are seized upon and made best use of. This brings us to ‘happy accident’ number two.

Long standing fascination in the story of the Hope Bank Pleasure Ground had taken us to an event in 2016 that was organised by the Holmfirth Sharing Memories group. Having left some contact details I received information about their participation at the 2018 Honley Feast when, together with a drama group, a performance of Sticklebacks and Swingboats re-enacted old stories of Hope Bank. I was slightly bemused to see my name on the event programme as someone who had shown interest in the organisation, but was more especially drawn to another name on the same list.

The history of Banks is inextricably linked to that of the Holdroyds who for at least 160 years ran their family business there. Starting out as a joinery shop in the early 1800s, Edward Holdroyd & Sons evolved over time becoming building contractors, electrical engineers and funeral directors. I had learned far more about the family and its history than was strictly fair given that they are not related to me, but the sight of Julian Holdroyds name on an incidental piece of paper provided an opportunity that was not to be missed.

An exchange of contacts with Sally Brown of the sharing memories group led to a meeting with Julian who, to my relief, did not view me as a stalker but rather greeted the project with enthusiasm. His support and the contribution of some of the materials that his father had kept gave the book a significant boost and enhanced the story of the Holdroyds considerably.

The title of the book started as a bit of a joke as Banks is unreasonably hard to locate. This is due to every mapping service getting the details wrong. Changing road names and inadequate signage, as well as an inconsistency in the numbering of properties, have been features of the area for as long as we can remember.

A whole section of the book, as well as a suggested walking route, is dedicated to leaving the reader in no doubt as to its geographical location. The apparent obscurity of Banks seems unfair as when it was first constructed it was part of the 14-mile Huddersfield to Woodhead Turnpike route. It was eventually replaced as the main road from Honley to Holmfirth by the A6024 Woodhead Road.

The gap in property numbers as well as the change from Banks to Far Banks had shown that at one time there had been something in between the two or to be more precise, 12 somethings. The discovery of the lost community of Upper Banks was particularly satisfying, especially as there is so little left to indicate its existence. Records show a number of key families living at Upper Banks whose lives are remembered in the book. We are also able to see how the communities of Upper and Lower Banks would have been connected to the Banks Mills which had been built alongside the River Holme in the valley below.

Through the recent history of one relatively small part of Honley village the reader is invited to learn something of Banks and its people during two world wars; to learn of the connection with an American town that is 3,000 miles away and, finally, to learn how the first ‘happy accident’ may have led to the 1903 papers being in our possession in the first place. Maybe it will also inspire other people to look into the history that surrounds us all; without actual time travel at our disposal, it is a worthy substitute.

Hopefully the book raises the profile not only of Banks, Honley, but also of a few key residents, particularly those whose families were around for more than a hundred years. These people all played a role in the life of our village – adults and children, employers and employees, ordinary family people who went about their daily lives, dealing with happiness and grief, with work and play, surviving (or not) illness and wars. Maybe they can serve to remind us that, whatever we are all facing in 2020, the continuing cycle of Honley life goes on.

To learn more about Finding Banks and how to purchase it, see here.

Link to a talk entitled Honley Naturalists C1860 to 1939, which was given by Alan Brooke to a meeting of Honley Civic Society members on 14th September, 2017 at Honley Parish Rooms. Alan has kindly permitted us to share in this talk. Some extra material which was excluded on that occasion due to time constraints has been added.